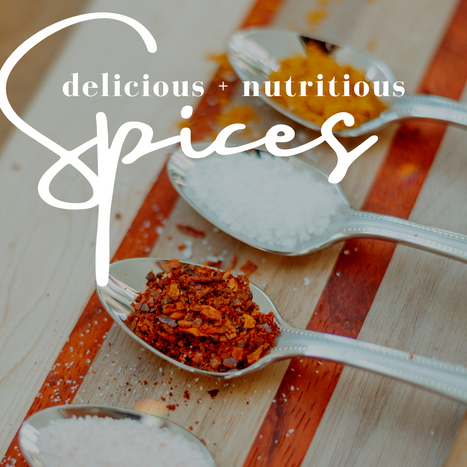 Understanding how to use spices can level up your cooking game in a big way. The same meal with different spices can completely transform your taste experience. Most importantly, many spices also carry remarkable health benefits. Figure out which spices your family loves and how you can use them in different ways.

Let’s take a look at five of our faves, the health benefits, and some ways to use them.

Did you know cinnamon can impact your blood sugar levels? Cinnamon can lower blood sugar and improve insulin sensitivity. Cinnamon’s compounds also have antioxidant, antimicrobial, anticancer, and antifungal activities and there is even some preliminary evidence that cinnamon may help lower total cholesterol and triglycerides.

Where to use: Cinnamon isn’t just for baking! Try adding it to coffee, smoothies, yogurt, fruit, hot cereal, use it in stews and chilis or as a spice rub.

The active ingredient in rosemary is called rosmarinic acid which has been shown to suppress allergic responses and nasal congestion. Rosemary is a rich source of antioxidants and anti-inflammatory compounds, which are thought to help boost the immune system and improve blood circulation. Rosemary is also thought to be a cognitive stimulant and can help memory performance, boost alertness, and improve focus.

Where to use: Rosemary is used as a seasoning in a variety of dishes, such as soups, casseroles, salads, and stews. Rosemary can also be infused in olive oil, added to butter or salt, baked into bread, included in a lemon sorbet or dessert pie, even muddled into a cocktail or water.

Ginger has long been known to treat stomach upset, diarrhea and nausea. But it also contains an active compound called gingerol, which contains phytonutrients that acts as an antioxidant along with antiviral, antifungal, antibacterial, anti-inflammatory, and analgesic properties.

Where to use: This spice is often found in stir-fry dishes, homemade salad dressings and baked goods. We recommend adding it in soups, smoothies and trying that trendy ginger tea you've been hearing so much about.

Cayenne peppers contain a substance called capsaicin. It’s what makes them spicy and also what can provide pain relief. Capsaicin reduces the number of pain signals sent to your brain resulting in less discomfort. Capsaicin has also been shown to reduce appetite and increase fat burning in some studies.

Where to use: Use this spice anytime you want to add heat to your food. It’s great in chili, soups, stews and on meat. Prefer to sip? Add a sprinkle to hot chocolate or a mug of hot tea to get that congestion cleared out!

Garlic is well known for combatting sickness, especially the common cold. But did you know that eating garlic may protect your heart from changes that lead to heart disease? For those with high cholesterol, garlic supplementation appears to reduce total and/or LDL cholesterol by about 10-15%. Studies have also found garlic supplementation to cause significant reductions in blood pressure in people with high blood pressure.

Where to use: Pair fresh or powdered garlic with olive oil and pepper to flavor vegetables or use it with rosemary to make a tasty meat rub. You can sprinkle it in soups and salad dressings, too.