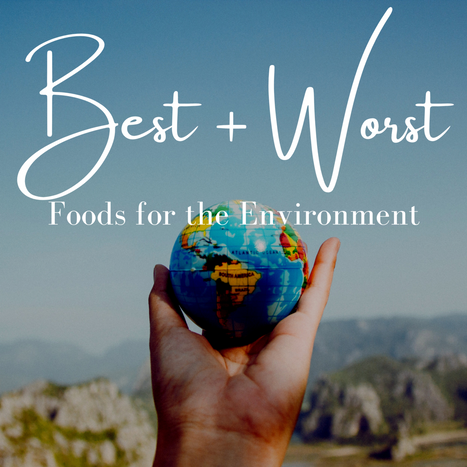 Best and Worst Foods for the Environment

With more and more talk about global warming, the energy crisis and limiting our carbon footprints, we are all feeling the pressure to look at the way we live our lives a little closer. As Moms we often find ourselves on the front lines working to make this a better place for the next generation. Most of us have already made small changes like using glass instead of plastic in our kitchens, encouraging our families to walk instead of drive and bringing our own bags to the grocery store… but should we be considering the impact of what we eat on the earth as well?

Let’s Start with the Worst

Beef - With the rise of Beyond Meat and the other faux meats of the world, it probably isn’t a surprise to you that beef ranks at the top of the list when it comes to the highest carbon footprint and detrimental effects on the environment. Producing a kilogram of beef emits 60 kilograms of greenhouse gases and requires over 900 gallons of water.

Pork- Pork may not have as large of an environmental impact as beef, but it’s impact is still significant. Eating just a 4-ounce serving of pork can be equivalent to the same carbon footprint of driving your car for 3 miles.

Sugar - According to a study by the World Wildlife Foundation, sugar is among the crops most harmful to the planet. By replacing habitats rich in animal, plant and insect life, sugar plantations destroy the most biodiversity in the world. In addition to its intensive use of water and pesticides, the cultivation of sugarcane and sugar beet also causes erosion, such that Papua New Guinea, whose soil used to grow sugar cane, has lost 40% of its organic carbon content, carbon which is now in the atmosphere and contributing to global warming.

Chocolate- Yes! Don't hate us, but chocolate too! The Theobroma cacao tree is a very complicated plant that grows only in certain areas around equatorial forests. It requires a lot of water (2,400 liters of water to make 100 g of chocolate) as well. As a result, cacao cultivation puts a lot of strain on natural ecosystems.

Coffee - Ekkk… another #MomLife essential is on this list! Coffee production emits 17 kilograms of CO2-equivalents per kilogram of product. These emissions are caused by farming, packaging, and effects on the land. Seeing as 7 in 10 Americans consume coffee at least once a week, our nation’s demand for coffee continues to grow and the impacts on the environment have followed suit.

So What are the Best?

Beans - Beans and other pulses (chickpeas, lentils, and dry peas) are able to convert nitrogen from the air and "fix" it into a form that can be readily used by plants. Pulses also use mostly “green water,” which refers to water from precipitation that is stored in the root zone of the soil and evaporated, transpired, or incorporated by plants- making them less reliant on additional water sources.

Leafy Greens - Leafy greens are considered one of the top eco-friendly and sustainable foods on the market. They require minimal resources to produce large quantities, they are just as good for the environment as they are for you.

Nut milks instead of cow’s milk! All non-dairy milks, whether they're made from nuts, beans, or seeds, produce less emissions than cow's milk. There are a few milks that are generally easier on the environment. According to Inhabitat, coconut milk, hemp milk, pea protein milk, and oat milk are generally low-impact, because they either require less water to grow or produce less emissions than other plant milks.

Mushrooms- A 2017 report by the Mushroom Council assessed the environmental impacts of growing mushrooms over two years and found that production of a pound of mushrooms requires far less water and energy than most other agricultural crops, with an extremely low CO2 emissions rate to boot. One pound of button mushrooms requires just 2 gallons of water to produce, which is far less than the average of 50 gallons of water per pound other fresh produce items demand.

Tomatoes- Tomatoes (when sourced locally) are another environmentally friendly food with combined emissions amounting to only 1.1 kg of CO2 equivalent per kg consumed. Tomatoes are also fairly easy to grow so start your summer garden with this vine!